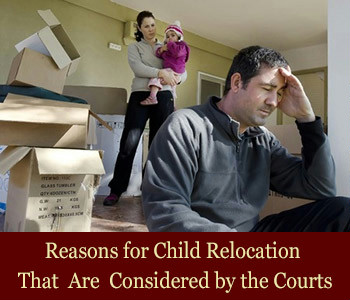 Economic reasons for child relocation are often cited in relocation petitions. In fact, even when other factors motivate the request, the court will look at the likely economic impact of a possible move. It is a logical approach since a family’s economic situation clearly affects the child’s well-being. While a parent moving out of state can create visitation difficulties for the other parent, courts recognize that adults sometimes need to move because they are being transferred by their current employer or have significantly better job opportunities in a different location. In this situation, the courts seek to determine what is in the best interest of the child by weighing the potential economic benefits against the possibility of damaging the other parent’s relationship with the child.

When a parent remarries, they may petition the courts for permission to join their new spouse in a different state. Alternately, they may seek a change in the existing custody order because of their current spouse, the child’s stepparent, needs to relocate for professional reasons. Since the child is likely to benefit from the pooling of their new family unit’s resources, courts will consider the potential for good, the necessity of the move and the chance that it will disrupt the other parent’s relationship with their child.

It is not uncommon for parents to ask to relocate so that they can be closer to their extended family. Most argue that being near other family members will provide a stronger support network and afford them assistance with childcare so that the parent can work or further their education. If the court is convinced that the move will offer the child advantages, it may allow it. However, the request may be viewed unfavorably if the court feels that the move will create a needless disturbance in the child’s environment or generate unreasonable hardships for the other parent.

Other personal reasons for child relocation can be also be used. For example, parents who request a change in the custody agreement so that they can move to join a new romantic partner may find the court willing to allow it if they can convince the court that the move will ultimately create a better situation for the child. However, if both parents are actively involved and have a healthy relationship with their child, one parent may be able to block the petition by arguing that it would unnecessarily interfere with their parental rights.

The issue of child custody is delicate and complex. In any child custody relocation case, all relevant factors are weighed to determine whether a move is in the child’s best interests. In this complicated situation, it is crucial that you have an attorney capable of guiding you through the process and safeguarding your interests. With more than 25 years of experience in divorce and family law, attorney Eric C. Cheshire has the knowledge and integrity to provide assistance with a variety of child custody issues. Contact Cheshire Family Law today to schedule a consultation.